Ethnic tribes in remote and picturesque Omo Valley : a travel back in time 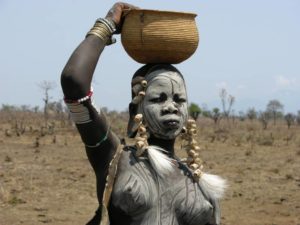 The Omo Valley is home to 200,00 people divided up in 80 tribes, speaking 47 different languages. These nations, from the many thousand-strong Borena to the just 1500-strong Karo, exhibit a fascinating range of cultural practices.

Four of Africa’s major linguistic groups, including the endemic Omotic languages, are represented within one relatively small area.

Just why there should be so many different people in such a relatively small patch of the earth is a matter of conjecture, but one probable reason may be the fact that that spot happens to be the place where peoples of four totally different cultural groups meet.

Following some anthropologists, the Omo Valley is not far from being the proverbial « Living Museum ». 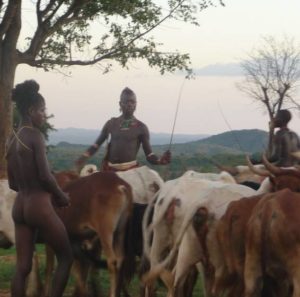 The many different tribes have learned to cope with the biodiversity and the harsh climatic conditions in which they live.

Each tribe has their own cultural or religious customs and take pride in preserving their traditions against the onslaught of time and tourism.

Some tribe men and women cover themselves in body paints, as if their hands were brushes and their whole body a canvass.  Paintings, tattoos, make-up and body ornaments of every kind account for the recognition gained by these men and women who did live in almost total isolation until the 1960s.

They have preserved century-old rites and ceremonies, such as the impressive so-called « bull jump« , celebrating young men’s rite of passage into adulthood.

One notable cultural practice of these different groups of people is the way they build their houses. The Dorze, the Sidama and the Gurage in particular are known for their domed or beehive-like constructions that demonstrate the different uses of bamboo. 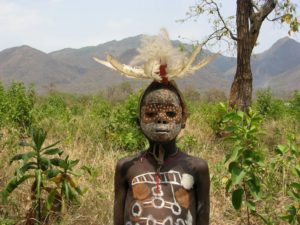 A unique experience of cultural immersion

Travelling to the South of Ethiopia opens up another world.

Visiting such unique cultures helps one to truly differentiate between what is really necessary in life and what is only cosmetic. It helps one to realize that it takes very little to be happy.

These are people whose life is not affected at all by the increase of petrol price or the decrease in dollar value.

They do not miss the multitudes of modern gadgets and comforts. They do not want much but what they need they get from nature inside which they are « happily lost« .

They are not primitive, as the uninformed may assume, but people whose values are different from that of the modern person. They live harmoniously and happily. 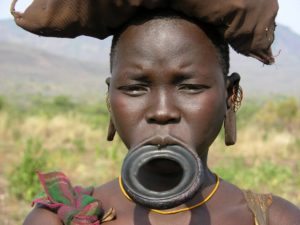 In the remote wilderness of the south west Ethiopia live the Mursi & Surma.

The peoples of this savannah and mountainous land have such extensive cultural features that never ceases to amaze visitors.

While the women show their beauty and endurance by the ear lobes and the piercing of the lips, the men demonstrate their courage and stamina in the stick fighting ceremony. 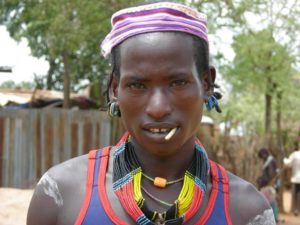 Inscribed in the far South West Omotic region, beyond Mount Buska live the Hamer and Benna people. These astounding and superstitious people, were veiled in mystery for over half a century.

The Hamer and Benna, are two of the Omotic speakers of remote south west Ethiopia, with unique manifestations of traditional wisdom, the « jumping of bull« .

The purpose of this rite is twofold : while one is the passage from boyhood to adulthood, the other is the courting occasion when both men and women adorn themselves to win a mate.

The men put an ochre buns on their skin and head and insert ostrich feather, while the women wear their hair in short tufts rolled in ochre mixed with fat. 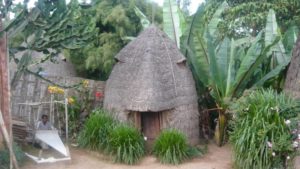 They are one of the small segments of the great Omotic language group of southern Ethiopia.

Once warriors, they now earn their living by farming and weaving. The Dorze name is synonymous with the best in woven cotton cloth and the tall-up bee-hive shaped bamboo house.

There is quite a big Dorze community living and weaving on the northern part of Addis Ababa, on the way to Entoto.

These peoples rarely use the administrative and police force of the city; they settle all disputes in their usual cultural way, through their elders. 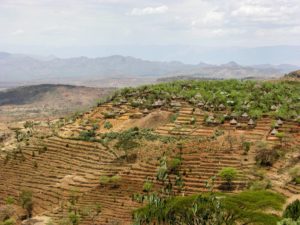 About 960 miles south west of Addis Ababa lies the widely cultivated Konso land that is embraced by Precambrian serpentines and granites.

The Konso peoples speak eastern Cushitic language and are agriculturalists and weavers.

These peoples are cryptic beyond visitors’ imagination which is demonstrated in the distinctive idealization of the figures and heroic lives of their deceased symbolized with wooden totem. 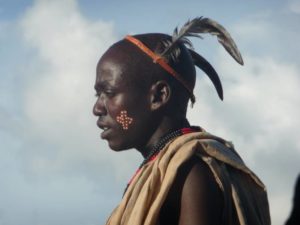 The Karo tribe residing along the borders of the Lower Omo River incorporates rich cultural symbolism into their rituals by using ornate body art, intricate headdresses, and significance within their community.

The most important ceremony in the life of a Karo is the “Pilla”, or jumping over a group of oxen. This ritual marks the passage from adolescence to adulthood.

The ceremony is similar to that of the Hamar, however the Karo only have four chances to jump over the oxen without falling.

The Dassanetch : people of circumcision 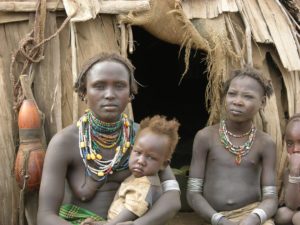 They speak a completely different language and are actually the Cushitic speaking group of the Omo Valley.

The most important ritual of the Dassanetch is the so-called dime. In theory, only a man who has had a daughter can be circumcised, although in practice, circumcision is carried out on the entire age-group.

The daughter is most important in the dime ceremony. After the ceremony, which takes six weeks, the participants are upgraded to ‘great men’, or those that may engage in politics.

The dime ritual is directly connected to the upcoming marriage of the daughter when large quantities of cattle are slaughtered for the occasion.

Visit Omo tribes with us :